skip to main | skip to sidebar

February 19, 1935
Dorothy Day writes, "It is just after midnight and I have been sitting in the outer office alone with two mad creatures with God in their hearts. All three of us tormented in our various ways, all three of us alone, so completely alone too. Karl's madness consists of going in for astrology--it is his passion and it must be regarded seriously."
I am reading "The Duty of Delight" (among other books and articles) and I was struck by this section of her 1935 writings. I feel as if we have all met a few different Karl's in our lives, so serious, so passionate and consumed by a topic, a new found love, or a tragedy yet to be experienced. Yet, when we meet Karl, it is typically easy to dismiss his curiosity and claim it only as foolishness and obsession. But, today, Dorothy reminds me to regard this as serious.
Right now, I am Karl, in fact, in some ways I am Karl, Dorothy and the third party. Alone, yet surrounded, in a large city, with so much to be discovered and revealed about the world and myself. This revelation seems to be right before me, but at this point, it is consumed itself, or at least lost in its own passion.
I do not remember who, or when, but I do remember hearing a quote from some woman once that-- 'boredom's only cure is curiosity, while the cure for curiosity is nonexistent'. The passion within me that has swallowed the revelation of today and yesterday, is that of curiosity. The cure is yet to exist, yet to be discovered, so step back Tolle.
--On a different note, today we celebrated Trinidad's Independence--46 years ago today, Trinidad broke free and became an independent.
607 days ago, I became interdependent, free-standing and thinking within the Adrian Dominican Sisters. That is worth a beer. If we don't celebrate now, we never will!
Posted by pray.seek.live. at 7:19 PM No comments:


I wish it was Alaska-fried, but that would indicate heat, and if Alaska lacks anything, it is heat. Have you ever woke up in the morning, started your car, hopped in, drove down the road at top speed, looking out into the Mountains while the thermometer read -17 degrees and said to yourself (out loud of course, because having people think you are crazy is the only way to live) "GOD, you rock, because your creation takes my breath away and your peace is real when I breathe the air that you breathe." 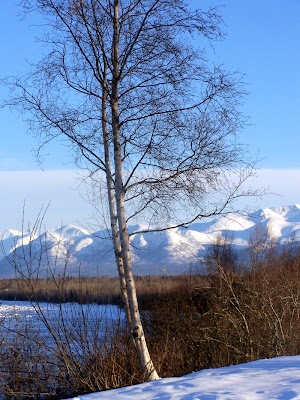 If you have not, then come to Alaska, because it is worth doing it at least once.
Ministry up here in Alaska would seem longer than the greedist kid's Christmas list, but for some reason, things move a little slower and at their own pace. I had been doing a little of this and a little of that, until recently, when my heart and attention were swept up by a survivor of human trafficking. Have you ever looked in the eyes of human trafficking? It is a lot different from what the articles and facts described, it is real, painful and more times than not, unfathomable.
Alaska has a lot of natural beauty, which is well maintained, but unfortunately, the beauty of the people, their needs and safety is often forgotten about by both the national and state governments. I have listened to the cry of the homeless for basic health care, as well as the natives for a basic education. These are important issues in this state, because there is not an easy exit, no matter which direction you take.
Did you know that 1 in 3 girls and 1 in 5 boys will be sexually assaulted before the age of 18 and that 1 in 4 college women will be a victim of rape or attempted rape, in the state of Alaska? That is three-times the national average.
I am in awe from the God that I see in these people who have nothing, who are struggling to keep their children warm at night and who ignore burns/frost-bite as if they were allergies. What happened to the American dream and taking care of the great citizens of this country? The truth is that we left them in the cold with enough money for a bottle of liquor.
Posted by pray.seek.live. at 9:15 PM 3 comments:

pray.seek.live.
Searching for freedom. Escaping into the creative lands of my fantasy world. Hoping for a revolution. Seeking the counter-cultural. Feeling the power of the universe. Soaking in the earth beneath my feet. This is a peak at life through the lens of a Dominican novice.

Yes, Nuns/Sisters Have Blogs Too